I went to bed with little expectation of seeing much of the “white stuff” when I woke up the next morning, a dusting perhaps.

God gave me a stunning surprise – the view out my window in the pre-sunrise moments looked promising. But when the morning began to shed its light on my yard and neighborhood, what I saw was total beauty!

Now for those of you for whom snow is a chore or to whom a foot or more is a daily or even a seasonal occurrence, you would laugh at what ended up being an inch and a half to two; but for those of us who rarely see snow in a winter, I was giddy for I am always in wonder of its beauty. A smile instantly comes to my face as the first snowflake falls, increasing into many more.

And yes, I love a good snowball fight, a little snow cream, and my feeble attempts at making a snowman. But so many other things also flooded my mind yesterday as I saw what had transformed my yard over night and then as more blew in, heavy yet softly, quietly spreading a comforting layer on our barren ground.

Winter had taken its toll on our land and the day before yesterday it was looking rather bleak, brown and muddy with a patch of bright green where we have a garden of lettuce. But as I stood and watched the transformation, I was struck by the newness, the fresh reality that filled my sight.

It was the same piece of land – nothing had been done except that with which our awesome God, the Creator and Sustainer of the universe, had chosen to delight us. He had gloriously crafted each snowflake and let them blow over the cold, grey day after ten days straight of frigid temps that threatened to tamp down the mood of many I came across…including my own.

It was His hand that created the freshness and led to a lifting of the heart! Though it was short lived, the moment was not lost on me, and it did much to renew our spirits. It was temporary joy that brought with it eternal perspective.

At times, we can view our lives through the same lens. Either we get caught up in the daily-ness of it all and become tyrannized by the urgent so that we miss and/or forget the truly important. Or we grow weary because of circumstances – our own choices, that of others, or any number of “hard things” that come with living in a fallen world. Our spirits can be “tamped down” by those “frigid” circumstances that sometimes make us feel immobile.

But God is not unaware. 

Our fears can weigh us down as we focus on the “what ifs” instead of looking to and embracing the God who is I AM and who holds all the “what ifs” in His hands; He Who knows the final outcome has promised to never leave or forsake His own. We can begin to see life in the greys instead of the rich hues hidden beneath the mundane, the sorrow, or the fear.

Throughout the Bible, God reminds us that He has made and is in the process of making all things new! We can look on situations in our lives and in the world and culture around us and grow discouraged, even fearful of the dismal prospects at times.

As we look through a glass darkly, we often miss the wonder of Revelation 21:5-6: “He who was seated on the throne said, ‘Behold, I am making all things new.’  He also said, ‘Write this down, for these words are trustworthy and true.’” HE is faithful and true!

It is a promise; it is a fact! He who is able to “wash me (so that) I am whiter than snow!” (Psalm 51:7) is able to bring a fresh perspective, a richer view of circumstances, yes; but, He is also in the process of transforming me more and more into the likeness of His Son and of doing astounding things we cannot see.

Greater yet, as He transforms me – His redeemed child – He is increasingly showing me more of Himself, creating in me a greater wonder and awe of the God who spoke all things into being and who continues to sovereignly order each aspect of His creation for His glory.

Just as the snow fell quiet in the night and transformed my little piece of the world into a place of wonder that lasted for less than a day, our God is actively working to do the remarkable but with an eternal exclamation point!

Habakkuk 1:5 says, “Look at the nations and watch–and be utterly amazed. For I am going to do something in your days that you would not believe, even if you were told.”

Though this was written hundreds of years ago to a different people, God has not changed and He is still powerfully and lovingly at work in a world crawling with terrible situations! We don’t have to doubt that or wring our hands in fear.

We work, yes. We act, indeed. We do all that He calls us to do because He equips us to do so, and then we rest in Him and in the plan He is unfolding regardless of what we see before our eyes.  We do not waver because He “has not given us a spirit of fear but of power, of love, and of a sound mind.” (2 Timothy 1:7)

Our winter yard is again brown and muddy for the sun returned and quickly melted away the snow. But my heart holds to the visual picture of truth that God gave me yesterday in the midst of our brief winter precipitation that will be indelibly marked upon my heart and that will be brought to mind as I view the pictures again and again.

That truth is more significant and far more eternal than a fleeting snowfall – that the everlasting God of the universe has, through the work of Jesus Christ, made me “whiter than snow” through the forgiveness of my sin and is continuing to change me for His glory; that this same God is the Lord over all aspects of my life as well as that of nations and rulers.

I am given occasions every day for fresh beginnings and a greater awareness of His love and power to make all things new!

Praying for eyes to see those opportunities and a heart to see and seek Him and what He is up to in my corner of the world and beyond!

(Although this blog was originally written and posted in 2013, just a couple of days ago we experienced the same thing; the amount of snow was similar and the photos look very much the same.  It is also true that, though the circumstances of these days in which we live are, in many ways, harder, the truths espoused in this blog post remain the same because God Himself remains the same, His character and the Truth found in His Word!)

Latest 20 Posts…More Past Posts Further Down 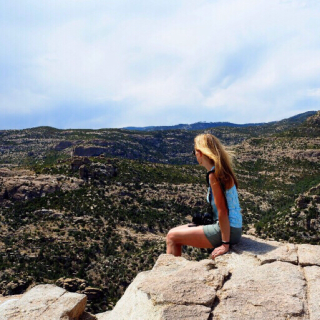 Joy In My Journey

I am thankful for the road on which God continues to lead me as wife to one and mom to three grown "children" and three more added "in-loves" (aka in laws) as well as "Yawnie" to five precious "littles," all of whom delight my heart!    I'm still growing in grace as God continues to transform me for His glory, finding joy in my family and friends as well as those God puts in my path, whether it be a small child I have been entrusted to teach, a young mom to whom I have the privilege of listening, a fellow believer walking the road alongside me, or a "random" stranger that enters my world for just a moment and either challenges and encourages me or I have the honor of doing the same. And I rejoice in seeking to find how He wants to use me in what He is up to in my little part of the world!   My truest joy comes from my relationship with my Lord and Savior Jesus Christ. His Word is my source of comfort but also that which confronts me and chips away at whatever is not in line with Truth, and I pray that everything I say and do reflects His love and grace well!  My prayer is that the name of our Mighty God will be praised through my simple journey and through the words that flow from my heart and are expressed in print.   Equally, my prayer is that, as I write and as each person reads this, they will be drawn to the heart of God through Jesus Christ and be able to find His joy in their journey through a relationship with Him regardless of life circumstances.  Walk this road with me and be encouraged even if also challenged! Because of HIS Joy! Dawn

Past Posts by Years